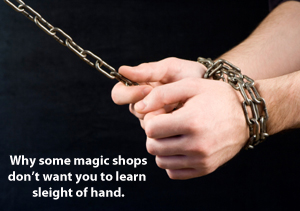 When I first decided I would learn how to do magic, I firmly believed that I could ignore sleight of hand altogether. I wanted to have fun with some magic tricks, show them to my friends and fool them. The thought of spending countless hours, alone with a deck of playing cards, left me completely cold. I saw magic as nothing more than party tricks. Maybe because of the way I discovered it, I thought that would be the perfect way to get exactly what I wanted, by the most direct method and in the least amount of time.

How I started out.
Like so many other people, I got the ‘magic bug’ by accident. I spotted a magic trick display in a high street shop. It was a circus equipment and juggling supplies shop, which had become a big craze in the UK through the early 1990’s. I popped in to look at the uni-cycles that were on display in the shop window. They looked awesome (and pretty expensive for a jobless student), so my eye soon wandered to the cabinet next to the bikes. I came face to face with a Thumb tip and silk, together with a video cassette that promised to show me 25 tricks with the thumb tip. I liked the idea very much, and headed home clutching the bag, planning to ‘do the heads in’ of my friends that evening.

How it went:
The Thumb tip and Silk worked like a charm. There wasn’t really any presentation,  other than ‘Hey, look at this’, but that didn’t bother me at all.  Suddenly, I had magical powers!  The next morning I was at the doors to the juggling shop just as the doors opened. Thoughts of uni-cycles had gone from my mind completely. I only wanted to look at the magic cabinet again and see what the next miracle, I would be doing that evening, would be.

Back to the magic shop
Trick number 2 was a Svengali deck. Another instant miracle that promised to make me an instant card expert. That evening, I convinced most of the student bar that they should NEVER play cards with me. On it went, each trip to the shop armed me with another incredible ‘skill’ and my reputation as, ‘The magic man’ spread like wildfire.

The end of the line.
It was 2 weeks later that I hit a problem. I had brought every trick in the shop, except for one dusty item that was at the bottom of the display cabinet. It was a little brass ring box. The guy behind the counter told me that it was pretty hard to do, so I had stayed well clear of it. But now, I had no options left. If I was going to add another trick to my ‘skills’ I would have to go for something a bit more ‘advanced’.  The brass ring box brought me slap bang to a halt. The instructions said:

‘Use your favourite method to vanish the ring’

That was it.. Nothing else was said about the first half of the trick. The rest of the instructions went into great detail about how to make the ring appear inside the locked ring box.

My favourite vanish? What does that mean? I don’t even have a single method, let alone a favourite one!

There you have it ladies and gentleman, the moment when I hit the wall that most beginners will face sooner or later: Time to learn sleight of hand.

Magic and Music
I think sleight of hand is very much like music. Sure, you can download as many songs as you like. Beautiful creations that are expertly created. But you will  always be consuming other peoples work. It doesn’t have to be like that. As you start to learn how to make the individual notes and chords of an instrument, you become free to make your own music, just the way YOU like it. In just the same way, by ignoring sleight of hand, you will tend to be a consumer of other people magic, rather than a creator of your own.

Magic Shops are happy to be like Spotify.
Magic dealers have always known two things to be true:

1) Most people that start learning magic the same way that I did. Beginners go through a process of looking for instant miracles when they give magic a try.

2) Most beginners give up as soon as they hit the ‘sleight of hand wall’.

This is something that drives me nuts: From a commercial point of view, there are dealers that feel that keeping beginners buying ‘gimmicked’ tricks that do all the hard work for them, makes perfect sense. The magicians remain consumers, and a large percentage remain interested in magic for longer.

the less they spend on magic tricks.

They slowly shift from buying gimmicks, to restocking on consumables like bicycle playing cards etc, and many dealers seem to want to slow this transition down.

It’s in a magic dealer’s advantage to focus on items that don’t make magicians self reliant.

Now, as regular customers of The Merchant of Magic know… The magic shop has always tried to fight this. That’s why I insisted that the shop runs personal sleight of hand tuition and workshops even though they are not really commercially viable. If I can push magicians past the ‘consuming’ stage, I believe I can open up a whole range of new magic possibilities for them.

I’m not saying gimmicked tricks are a bad idea. Many of the best close up magic tricks are heavily gimmicked. My point is that you should, as soon as possible, start to learn some basic sleight of hand so you can build and structure your OWN tricks.

When you learn sleight of hand, you get a set of building blocks that you can use to adjust and adapt the tricks you already use. It allows you to invent your own tricks and stops you being limited in the tricks you can add to your act. Don’t train yourself to just be a consumer of other peoples magic tricks. If you acquire the tools and building blocks to build magic tricks, you free yourself from the constraints imposed by other peoples thinking.

It’s vital that, when you choose a magic shop to build a relationship with, as you learn your magic, that you pick one that encouraged you to learn sleight of hand as well as gimmicked tricks.

DO THIS: Choose a core sleight of hand move that you will commit to practicing on a regular basis. Learn sleight of hand with just one move and build in a regular practice time for the move. Here are a few moves that would make a great starting point:

The Retention of Vision Vanish