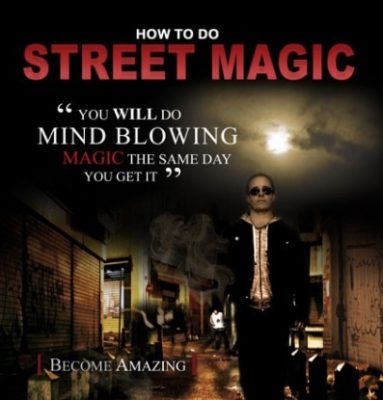 Street Magic used to mean a performer that would gather a crowd for a show and then pass a hat around at the end to earn a living, the term Street Magic now it is used to refer to magicians that perform unprompted. Street magicians approach people in the street, often for free, simply for the love of performing.

There are lots of magic tricks that are great for street magic, and some that are not so great. I will go through a few key points that I believe make a great street magic trick.

Make your street magic quick and to the point.

Build up short routines that do not drag on. When you perform street magic for the public, they have not paid for a show and are not expecting one, you are essentially taking up their time. It may be to show them something amazing that will enrich their lives, but it is still their time you are spending. After you show them something, they may well want to invest more time in you then that will be their choice, and you are then free to show them some more street magic.

You will find the reactions are much better if it is visual. Street magic has got a reputation for being visually amazing and so when you perform magic tricks for people in public this is what they expect. The public can be pretty honest in their opinions and harsh as critics, so it is best not to let them down!

Try to use ordinary or borrowed objects.

It is best to use items that are ordinary and not magic props. The idea is that you can perform magic tricks with anything and everything, so it is best to create that illusion. Steer away from obvious magic props like boxes and things you would ONLY find in a magic set or magic shop. If you can borrow someone’s phone or personal item and perform an amazing magic trick with that, you will see your reactions go through the roof.

You can find out about a large selection of magic tricks for street magic conditions here.