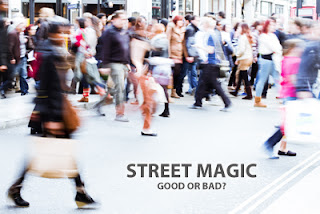 Sam asks:  ‘How do I approach someone in the street to show them street magic tricks?‘

The team at The Merchant of Magic has been asked this question much more frequently over the last few years as more and more magicians become inspired by street magic on TV. The David Blaine street magic specials and the Dynamo Magician Impossible series have made approaching people on the street, appear to be an easy way to perform magic and get great reactions.

Hat’s off to Sam. He wants to get out and perform his magic, and is being proactive looking for an audience. Performing live is an essential part of every magicians training. However, we would not generally recommend that you approach people on the street. That’s more suited to a TV show that has permission and insurance to film. Let’s look at the reality for magicians considering this style of magic:

Magic on the Street Vs Street Entertainers.

There is a big difference between a street entertainer and a magician who walks the street showing people magic. Street entertainers tend to draw in a crowd, rather than stop people cold. The difference is permission. A street act is a show, designed to catch peoples attention, draw them in to watch and then entertain them. It’s a soft sell technique. Street entertainers don’t have to negotiate for attention. They perform, and the audience decides for themselves if they are interested in watching the magic.

In contrast, the skills to stop people on the street to show them magic tricks are very different. It’s a hard sell approach. The magician is forcing people to make a decision to watch the magic and receives either acceptance or rejection. That’s much tougher on the ego for a magician,  especially a beginner. The magician has to search for an audience over and over and over again as the group of spectators move on.

A street entertainer must create an entertaining act and learn the techniques and skills to build a crowd, hold it’s attention and work it as a group. A street magic magician, needs to master the cold call, introducing themselves, dealing with rejection, and performing to a small group.

People like to be entertained, but generally on THEIR TERMS. People walking on a street are already doing something. They are traveling or shopping. Magic is a distraction to their primary activity, so right from the start, it has to negotiate with the spectators primary goals. That’s not a good starting point. Your introduction as a magician, your appearance, and manner all have to sell the proposition to the spectators. Unlike a street entertainer, that creates a spectacle, builds a crowd and then uses that to attract more VOLUNTARY interest, the street magician has to get permission from each group he or she approaches.

Permission also needs to be obtained from the venue or council in many locations. What may be viewed as street entertainment to some, is viewed as hawking by others.

It’s very unlikely that magicians will be covered with public liability insurance for stopping people on the street to show them magic tricks. It’s unlikely that your magic will cause a problem, but things can go wrong, people can be distracted and have accidents as the street is not a safe environment.

Interrupting people in a hurry.

Unless you pick a venue like a park or recreational area, it’s very likely that the majority of people traveling will be in a hurry and will not want to stop. It’s important that you bear this in mind, and be respectful of people not stopping, or being responsive. Even when people do stop to watch, sometimes they are doing so, as it’s awkward to say no (Have you ever stopped for a survey or charity collector, simple because you didn’t want to say no?) Understand this, learn to recognize it, and be respectful of people in this situation.

Are you trying to sell me something?

Streets are full of shops, and shops want to sell you stuff. Hawkers want to make money off people on the streets to. Most people will thing that you are trying to sell them something, in the first few moments that you approach them. You will need to find quick ways to defuse this concern.

Expect to be rejected far more than you will be accepted. Even street magic TV shows have to stop a lot of people off camera before they find someone willing to stop and take part. No, thank you, is not an insult to you. It’s easy to be disheartened or take it personally, but you must learn to accept that it’s a positive, polite and helpful act from the spectators. Letting you know they are not interested, saves your effort and allows you to move on to the next group quickly.

Not everyone is nice.

The streets are the streets, and everyone walks them. Sooner or later you will run into someone who is not very nice, has problems or is simply looking for a victim. Your safety is far more important than a card trick.

The right sort of crowd.

Picking the right people to stop and show your magic tricks, is a skill you will build up over time. People relaxing in small groups may be much more inclined to watch your magic, than a business man on his way to a meeting. Picking locations where people slow down and unwind will give you a better ‘hit rate’ than busy street junctions.  Parks and public meeting points generally have the best chance of meeting willing spectators.

If you do intend to stop people on the streets to show them magic tricks, don’t do it alone. Take a friend or work as a group. Your personal safety is not worth risking.

If you REALLY feel you want to do this, we would recommend taking on some part time work as a market researcher, you will get a LOT of experience with cold approaches on the street and learn some valuable lessons on how to deal with people in these situations. Market research positions are relatively easy to get, on a part time basis, often paid on commission.

We would love to know your experiences of performing street magic. How did you start? What did it teach you? Please share your thoughts in the comments section below: