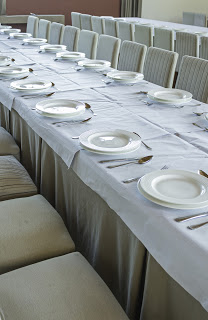 Carl writes:  ’What’s the best way for magicians to perform magic tricks at a large table?’

That’s a great question. It’s easy to perform at small table of 4 – 6 people, but what happens when you have a large table of more than 10? What should you do, if the host has arranged the tables all together in a long row?  We thought we would give you some tips.

When you walk up to a table, look for a gap between two people that are not in conversation. If you suddenly appear between two people talking, there is a chance you will be ignored. Not being noticed by the guests next to you is a strong signal to the whole table. Not the impression you want to communicate. Find a space which isn’t hidden by large objects on the table, so everyone can see you. A visible space, between two people who are not already ‘engaged’ will mean that they both stop and look at you. Everyone else can see that you have arrived, and that people are paying attention.

A large table, by its nature, has a lot of people around it. That means that it will have plenty of stuff happening just as you approach it. It’s easy to go unnoticed, unless you make sure you can capture the attention of the group.

When you walk over to a table, some people will notice you and stop their conversations to pay attention to the new arrival. Some may think you are a waiter, and have come to bring something to the table, whilst others will simply ignore you because they are deep in conversation. It’s vital that you are confident at this point. If you sneak up to the table and stand there waiting for everyone to stop what they are doing, you may be in for a long wait.

It’s time to say something. Address the people on the opposite side of the table. Introduce yourself, and say briefly what you are about to do. Make eye contact with several people as you do this. Your introduction is about starting a conversation with the whole table.

Resist the temptation to ask people to stop what they are doing. Instead, use an indirect way to gather everyone into the show that is starting. One way to do this, is to pick a volunteer and ask the whole table to give them a round of applause for helping you, this will politely end most conversations that are happening because something very interesting is going on with the rest of the group. It’s also very enjoyable for the table and a great signal to give to the rest of the room.

Use magic that gets people involved. Ask questions and get people interacting with other people around the table.

•    If you need a card signed tell a few people to sign their name on it or draw a silly picture on it.
•    Ask a question for a show of hands: ‘So, who here, has ever been a magician’s assistant?’
•    Get people voting : ‘Please put your hands up if you believe in magic?

Don’t stay in one spot through your whole act. Circling the table as you address people between tricks will make people track you. As you move, ask a question or tell the table something, so they follow you. Moving around keeps the energy going and captures the attention.

It’s all about giving people something to do. They clap, put their hands up, volunteer someone else, answer a question, follow you as you move to another spot, or get involved by holding an object. If you engage people ALL AROUND the table, you can easily hold the whole group’s attention.

The worst table a magician can ever worked on is the long table. This is a popular room set up in very large events, and can be a particular challenge for new magicians. Often, one side of the table is close to a wall, so it’s not possible to travel all around the group. In these situations, it’s best to break the table into distinct groups and work your way down the table. Apply exactly the same techniques described above, but treat each section of 8 people as their own group. Perform different tricks to each section.

Performing your magic tricks at a large table is not as hard as it looks. It’s all about audience control, and that is 99% about giving people fun things to do, a reason to participate, and the social signals that a ‘show’ has started for them.