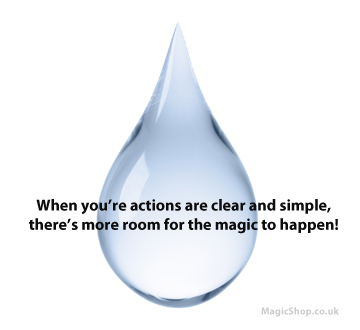 When you perform card magic tricks, are you tempted to add in additional cuts and flourishes to demonstrate your skill with playing cards?

These demonstrations of skill can delight audiences, and quickly establish you as a competent magician. However, it's important to understand that even the most advances and impressive playing card flourish could hurt the dramatic impact of a card magic trick, if it's used in the wrong place.

Dominic Reyes recorded this short video in which he talks about the time and place for flourishing within the performance of a card magic trick:

So, when is it the right time to perform flourishes with your cards?  After all, these moves take considerable time and commitment to master.  Dominic suggests that the best time for these demonstrations is BETWEEN  your tricks, rather than when you handle the playing cards during an  effect.

Anything that is unnecessary to moving the magic  trick forward to it's conclusion is reducing the clarity of the effect  for the spectator. The playing cards or deck of cards should be handled  as little as possible, and with clear movement and minimal action.  By avoiding flourishes and trick cuts as you shuffle and handle the  cards, you reduce the possible 'points of method' that the spectators  can jump on as the moment something sneaky took place.

Using  demonstrations of card manipulation as you move from one card magic trick  to another may work much better. It can help create a flow and pace to  bridge between your individual tricks, keep the spectators engaged, and  also appear to be magical events in their own right. By making your  flourishing separate and distinct from your tricks, you avoid the  flourish being mistaken for the mechanical method of the trick you are  presenting.