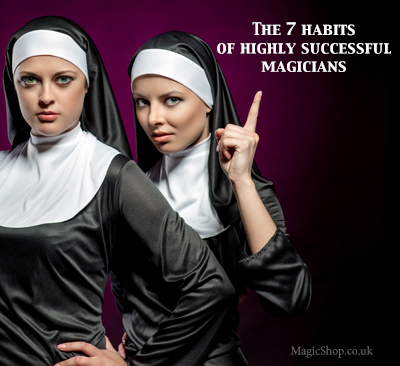 Over the years, I've had the pleasure of working with some of the most talented close up magicians in the world. By viewing these successful working magicians in action, it's possible to spot several factors that they all have in common. We can copy these 'habits' and add them to our own practice and performance of magic. Lets look at the 7 performance habits most often found in the behavour of successfull magicians:

1) Keeping control of the audience

It's important to learn how to control and direct your audience. Successful magicians take time to learn how to capture attention, foster interest, and control a group of spectators. Reading books on direct sales and showmanship just as much as you read magic books can help you learn ways to gain control of your audience and keep their attention throughout your performance. Discuss audience management with other performers. Take note what works well in a live situation. Successful magicians will often spend just as much time relating to their spectators as they do performing the mechanical aspects of their magic tricks. Time is taken to perfect posture, eye contact, and pacing, to control how a spectator reacts. Learning how to control an audience will ensure that you don't hesitate if a spectator suddenly asks you a question in the middle of you trick. You learn to keep your cool by anticipating this behaviour in advance, whilst not appearing to ignore the interruption that may have taken place.

Successful magicians make a habit of arriving in plenty of time for their shows. Being on time is vital if you want to build a great reputation. In fact, being on time is not good enough. Arriving early to a gig gives you time to check out the venue, chat with the client and the event staff, and address any unexpected problems that may have occurred. If you are booked to start at 8pm, make sure you arrive by 7pm. An extra hour may seem excessive, but it pays off over the long term. Being relaxed, ready and prepared is far more important than an extra hour before you set off for a gig. That hour is usually spent in 'preparation limbo' anyway, so spend it at the venue instead. Being early means that you stay calm and relaxed.

Do you remember your first magic gig? I do remember my first time performing as if it were yesterday. I took way too much stuff with me, and loaded my pockets with as many magic tricks as I could carry. I remember laughing after the gig that I really only needed 20% of the items I carried with me that night. In fact, the gig was harder because of all the equipment getting in the way. Successful magicians know exactly what they will need for each gig and streamline their pocket management, so every item has its place. The magic tricks that successful magicians perform tend to be built into working sets. Each set is designed to have the right resets and the magic props have locations on the magician which allow him or her to move through the set without fumbling for pens, cards or any of the props needed for the set. Good pocket management will make your magic seem effortless and spontaneous.

4) Knowing when to arrive and leave.

The best close up magicians know just when to join a new group and when to leave. They don't just plough into a new group as they stumble through the room working. They look for 'in' moments, when there is a break in the conversation, and they can engage the group without interrupting a guests anecdote or joke. Successful magicians know how to leave a group wanting more. Their magic are constructed to:

Knowing when to stop performing is just as important as the choice of magic tricks that you perform. Successful magicians perform just enough to entertain the group, but not so much that they are taking over the whole event. The secret is to leave them wanting more. Perform a few tricks, and promise that you can return later if they request it.

5) Effective use of space.

Close up magicians don’t use a stage for their shows. The magic happens right in the thick of the action. That means there is little or no control over the performing environment. Successful magicians will have already scouted out the venue before they start performing. They know the blind spots in the room, the walkways, serving points and access channels around each table. When they perform, skilled magicians move around through the show, making sure that everyone is engaged and gets to see the magic tricks up close. Motion is life, and motion created energy. Standing in one spot though your whole set of tricks, doesn’t help build energy. It’s one of the reasons modern comedians tend to pace up and down the stage as they deliver their stand up comedy. Movement keeps peoples attention.

There are commercial magic tricks, and tricks designed for entertaining magicians. One of the most common differences between the two forms of magic is simplicity. Successful magicians understand that the magic tricks they perform need to be simple to understand. A general rule of thumb is: A magic trick should be easy to explain in a single sentence. When it comes to casual walk-around magic, effort= boring to the spectators. That doesn’t mean that the magician can’t perform magic that touches on complex concepts, but the presentation needs to be clever enough to reduce the complexity to it’s simplest form, so most of the thinking has already been done for the spectators. A great example of this in action is the work of Derren Brown. Many of these presentations involve quite heavy  theories or concepts. However, his entertaining presentation simplifies this for the audience, so they don’t feel like they are having a mental workout.

Probably the most important skill of successful magicians, yet one that is so often overlooked, is timing. Knowing just when to pause, when to speed up, and when to pass a cheeky smile to the spectator. Timing is everything, once the mechanical aspects of a magic trick have been mastered. Despite this, it’s often not discussed in the instructions for most magic tricks. Timing comes from rehearsal of the whole trick, including the patter and physical actions. It’s then developed through live performance and remains in a constant state of development though out the magicians whole experience performing the act. There are many courses and books for actors on timing, and it’s effort well spend, building up as much knowledge as possible on this key skill to becoming a successful magician.

Where the 7 habits of sucessful magicians come from.

What do all 7 habits of successful magicians have in common?  None of them are found in the instructional DVD that comes with most magic tricks. They develop through performance. Not necessarily live to the public, as performance can be simulated in rehearsal, but they only develop through applying each magic trick into the environment that it will be presented within. To develop the 7 habits of successful magicians, I recommend getting as much experience as possible, performing your magic to strangers in a social setting. This doesn’t need to be paid gigs, you can do charity events, fund raisers or community social gatherings. The key is to get out and find out how magic is presented in the real world, with all the distractions and interactions that provides. The rewards you will gain, in the development of your magic performance will be limitless.