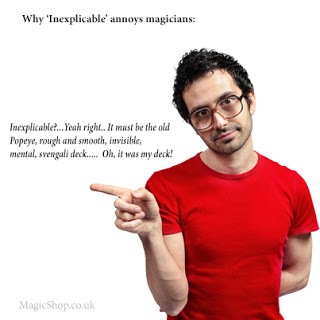 Dominic Reyes: Inexplicable is another take on the ‘Open Prediction’ Why are you drawn to the open prediction concept?
Steve Shufton: The open prediction, in my opinion, is one of the very strongest plots in mental magic, so yes – I am drawn to it like a magnet. This is mentalism/magic that can truly demonstrate the impossible.
Dominic Reyes: In what way?
Steve Shufton: When a woman gets sawn in half, the illusion can be remarkable, and in some cases, no one will have the slightest clue how it was done. Even so, no one thinks for a moment that the woman was actually split in two – no adult would think so any way. Impossible location magic tricks are very strong – I have created several excellent ones myself. Here again – the illusion may be perfect, and no one will have the slightest clue how it was accomplished. But, no adult will think that there was an actual de-materialization. Instead they will credit you with remarkable skill.
Dominic Reyes: So with an open prediction trick, you are also causing a conflict between analytical reasoning Vs. the emotional reaction of the spectators?
Steve Shufton: With an open prediction effect, especially along the lines of Inexplicable, it starts to blur the lines, and the possibility of real mental magic becomes an option. Why? The possibilities of manipulation, switches, trick decks, etc., are eliminated. This is the type of effect that will not soon be forgotten – some spectators may even be deeply troubled and lose a wink or two of sleep. This phenomenon is shared by effects like ACAAN, or another of my own very strong effects, X-Ray. These are magic tricks that defy explanation – for both lay people and magicians.

Dominic Reyes: Why are simple and direct plots such as the one in Inexplicable so powerful?

Steve Shufton: As the great Dai Vernon once pointed out:
‘Confusion is not magic.‘
Simple and clear effects make for good magic. If you can sum up the effect in one or two sentences, you are heading in the right direction. If a spectator cannot easily describe what they just experienced, a lot of the possibility of magic is lost.

Dominic Reyes: Why have you chosen to release this without filming a trailer?

Steve Shufton: So many of the trailers I have seen with this type of effect tend to follow the same formula. First, there is some kind of opening high-tech logo presentation – often these are almost as long as the demo. Then, again with this type of magic trick, you see a demonstration of a possible outcome, and assume each presentation goes the same way. Often the presentation itself is broken into several snippets. Then, the great bulk of the demo is shots of reactions – usually hysterical responses, to entice you to believe that your spectators will completely flip out. I am not in love with most of that.
Dominic Reyes: So you think it leads people down a path to an anti-climax?
You order it. You find out that you only saw one aspect of the effect, and you are disappointed. You find out that the method is more transparent than was revealed, and more disappointment sets in. You decide to perform it, and you are not met with the anticipated hysteria. More disappointment. Finally, you put it in that drawer, vow to never get sucked in again, and your experience ends with that final disappointment.
I have prepared demos of most of my magic tricks, and there are some magi who have also created splendid demos of some of my tricks. But, in this case I have decided to go with two very convincing factors:
In addition, I think this particular effect is so special, that it would be nice if the only folks seeing it are YOUR audience, and not a demo on YouTube that decreases your chances of showing someone something they have truly never seen before. This one will fool your magic buddies! So, assuming you like themagic trick , there is an advantage for YOU to not have a demo.
Dominic Reyes: You weren’t worried it would hurt sales then?
Steve Shufton: I think this magic trick is so strong, that I am taking a risk by not producing a demo. It has not hurt sales, has it Dominic?
Dominic Reyes: No, the responce to Inexplicable has been outstanding. I did try to push you to film a demo, and some magicians are waiting for initial reviews, but it seems the vast majority can see the simplicity of the effect, and have faith in your reputation. It’s been a great success.
Steve Shufton: The final convincer is yet to come – the reviews that are likely to spring up all over the place, in magazines, etc., but also including here, on this site. I sincerely hope that no one ever produces a demo of this effect, so that we magi can have something very special, and keep it all to ourselves.

Dominic Reyes: Do you make inexplicable yourself or is it mass produced. What do you feel if the benefit of this?

Steve Shufton: I make each individual one myself. If there is a part I cannot possibly make myself, of course I must have that done for me. But, in this case, I did the die cutting of parts, the assembling, the writing and design, the printing, the trimming, the packaging myself. The benefit? I know that each one meets my expectations. And, in the rare case that one did not go out perfectly, I know who to blame – ME. At some point, I may have an appropriate effect fully manufactured – but that has yet to happen.
Dominic Reyes: Inexplicaple is being compared to CAAN effects. How do you feel this differes and how does that give it an advantage?
Steve Shufton: CAAN and ACAAN very different effects than this particular open prediction. Picking a number or naming a card is much different than dealing cards face up from a normal deck and stopping whenever you want. I cannot claim an advantage. Acaan can be incredibly strong. I perform my own version with some frequency. I have several name-a-card tricks I perform. One of my open-prediction effects (Miracle Premonition) is a name-any-card type of effect. Is it strong? Of course! It would be hard to argue if one is stronger than the other. Our objective is to deliver something magical to our audience. By whatever means we are to accomplish this, we have done the job. I must admit, though, Inexplicable is one of the strongest things I have ever come up with – I’m proud of it.
Dominic Reyes: The ‘test conditions’ in Inexplicable are very impressive. Why do you feel these are so important?
Steve Shufton: By eliminating every possible solution – that is the very thing that makes the effect inexplicable! If the spectator has nowhere to go, what results is true, deep astonishment (phrase borrowed from Paul Harris Magic) – the gold at the end of the rainbow.
Dominic Reyes: Inexplicable requires no sleight of hand. Was this a conscious decision on your part? What part do you think sleight of hand has within good card or mind magic?
Steve Shufton: Most decent card magic is accomplished through sleight-of-hand, and hopefully that will not change. Most of the effects I market require no sleights. Sleights, especially some in particular, require a serious level of skill to perform. In fact, most of the magic effects I perform for the public involve some sleight of hand. Coins through the table. Ambitious card. Etc. The effects I create for the magi are not so dependent on their skill level. If they were, there wouldn’t be much of a market!
Dominic Reyes: So the million dollar question Steve: Why do you do it?
Steve Shufton: I only release magic tricks that I think you will really like, and use. I put a lot of work in, and that is also for you. I love magic – the art of magic means a lot to me. I don’t want to be embarrassed by letting out any second-rate effects. I’m too sensitive and couldn’t take the back-lash. This is not all about money for me – how could it be? My family would starve in no time if I were to depend on my effects to take care of us. What it is really about, is the magic. Making a contribution to the art I love, and maybe inspiring another to love magic as deeply as I do. It is hard to part with an effect – it’s like seeing your kids go off on their own. So believe me when I tell you, it is about the magic, and it is about attempting to inspire YOU to excel in this field – the one I love so dearly.
Dominic Reyes:  Steve, Thanks for taking the time out to answer these questions. I’m very impressed with Inexplicable and I’m glas it’s been so well received by both professional magicians and the casual performer communities. Do you have one last bit of advice to those magicians beginning their practice work?
Steve Shufton: Thanks for giving me a chance to say, probably, too much! Please practice everything you want to perform so that your audiences will see perfection, and most importantly, MAGIC.
Inexplicable is launched worldwide on the 1st of July 2013.
You can find out more about Inexplicable here.