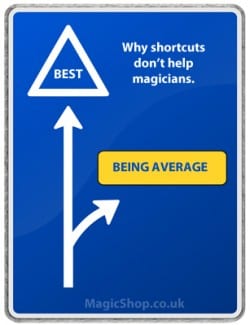 The types of magic tricks that famous magicians perform has become quite a hot subject within the magic community recently. I believe this is due to the amount of magic that is now being broadcast on TV.

There is a common theme that does run alongside all of the famous magicians:

How many famous magicians do you know that entertain theatres, or television audiences with impromptu magic? I actually cannot name one, every famous magician that has made their entire living from selling out theatres or starring in TV shows all spend huge amounts of time on preparation

What do I mean about prepping magic tricks?

I am not talking about practicing your sleight of hand techniques or routines here, I am simply talking about how much preparation you should do for your magic tricks.

Is there a gimmick to be made, is there a large set up, is there a tool or accessory you need to add to your clothing? All of these processes need to be thought about before the performance. By thinking about preparing your magic, whether it is loaded into an impossible location for a reveal later, or making sure your topit is properly installed can make your magic seem impossible and impromptu, when really it is not at all. Preparation allows you to give the illusion of performing impossible magic in a seemingly impromptu setting but does not have the restrictions of an impromptu magic trick.

The appearance of being impromptu.

All the famous magicians with TV shows go to extreme lengths to achieve the caliber of effect they put across to the public. Dynamo magician impossible, David Blaine, Criss Angel they all employ elaborate methods with multiple layers of deception across all borders of their performance in order to be able to keep showing the standard of magic tricks they have become known for.

In the 1970s and 80s there was a TV show by the famous magician, David Berglas – The International Man of Mystery. David is the king of prep work. His methods were so convoluted and extreme that they usually need extra hands to help plan everything. David, being a genius and taking secrecy so seriously would only tell the aide the part of the secret that was relevant to them, and that is all they would know, so not one person apart from David knew the entirety of his secret methods! The result was that his shows had regular viewing ratings of 18 million people and the media attention he garnered was immense. David’s huge stunts were talked about all over the country, much like Dynamo’s publicity stunts, like walking on the Thames has catapulted him into the worldwide limelight.

“If you want me to give you a two-hour presentation, I am ready today. If you want only a five-minute speech, it will take me two weeks to prepare.” – Mark Twain

Impromptu magic definitely has its place in every magician’s repertoire, to be caught short is no fun. If you have some strong magic that can be performed at a moments notice with borrowed items, the reactions can be amazing. In fact, they can be of an almost miraculous status as you are performing with a familiar item to them, and it seems to be on a whim! It is not on a whim because you will have spent time learning and practicing this magic trick. It is just the situation arose where it was the right time to perform it, and no further preparation was necessary.

However, this sort of approach is situational and not reliable. You cannot film for a TV show and hope that someone has the item you can perform with, the magic tricks need to be fixed and organised to guarantee success.

How much prep time should I spend on my magic tricks?

There really isn’t a perfect answer for this, what I will say though is, do as much as you are prepared to!

Some magicians have no interest in prepping their magic tricks, and putting time into their magic tricks before a performance, and that is fine, you can be a great magician. However, you cannot translate those to a TV show or a stage show so you will be locked in the close up arena. If you wish to become a famous magician with a Broadway show, or a TV series, then you will have to start to look at ways to make your magic more impossible and unique. For example,  you may set something up inside a product, and leave it in a shop if you stake out the shop until someone buys that product, then you have an absolute miracle on your hands that fits TV. That is just a small example of how you can multiply the impossibility factor with a bit of thought and prep.

Be one of the few performing these magic tricks.

One of the things that famous magicians must do is find unique twists and presentations for their magic tricks. Dynamo magician impossible cannot be seen to be performing the same magic tricks that David Blaine is performing. Criss Angel doesn’t want to perform anything that Cyril Takayama is performing. This results in a lot of thought, care and attention going into the preparation of each magic trick.

If you are willing to put the extra work into your magic then you will be one of the few that do, this means that you will be performing magic that is rare and not often seen. If a lay person has seen a magician, there is a good chance that they have seen the sponge ball trick, or the trick where the card keeps coming to the top of the deck of playing cards. They most likely will not have seen a signed card in ice such as Remaxed Iceolaion, or a torn and restored photo of themselves. The more unique your magic, the more memorable it is, and the more memorable you are.

I know of a great magician who performs a magic trick that takes 7 days to prep, a whole week to perform a magic trick, once! You may think he is mad, but he has had more repeat bookings from this trick than any other and no other magician performs this trick making him unique.

Getting the same reactions as famous magicians.

Part of why the magicians on TV get the huge reactions that they do is the planning and preparation that goes into their magic tricks. A single magic trick may have taken hours, days or even weeks to set up and arrange. This meticulous attention to detail and planning results in a miraculous result.

Some things are just not possible to do in an impromptu setting, but set everything up and then perform something as if it were off the cuff, and impromptu, and you will receive the greatest of all reactions. Just the standard method for card through window needs a small bit of prep work, but the results and reactions are huge, try to do it impromptu and there is always a compromise that you have to factor in, this can greatly change the reaction you receive.

This is probably one of the best things about performing magic tricks that require prep. Often a magic trick like that will leave something suspended in a magical state that can be kept as a souvenir. This can be worth its weight in gold as people keep these souvenirs and show people for years to come. Every time a magician is mentioned in the future the lay person will talk about the magic you performed for them, and if they have the souvenir in their wallet they will certainly remove it and show everyone.

These are just a few things to take into consideration when you decide upon what sort of magic tricks you like and perform. I absolutely love to perform a mixture of both impromptu and set up magic, usually leaving the spectators with the set up magic trick as the final trick, the one that will be fresh in their memory when I leave, and therefore most likely be the one they remember most.