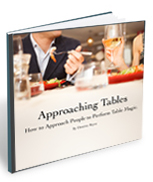 Approaching Tables – How to approach people to show them magic tricks.

A lot of magicians worry about how they will approach people and start performing magic. There are ways to easily identify the best method for approaching a group, and several techniques that can make your approach far easier and more effective.

In this free book Dominic Reyes shares what he has learn’t about approaching people to perform table magic over the past 20 years.


The tips and advice are intended to give you a feel for what to expect, ways to be prepared for most situations, practical tips that will make a huge difference to the reactions you get when you join a group, and the degree of attention your guests will show you right from the beginning.

'Great eBook on "Approaching Tables". Good tips that all magicians can use.' – Marcus Bailey

'Very thorough on all aspects of close up at tables. Every magician should read this. There is something for everyone!' – Ricky Morgan

'The ebook is very useful raising points I probably would never have considered years ago.' – Boris Leistikow