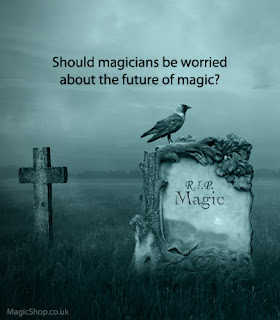 Magicians love to complain about the state of magic today, always harking back to the golden age of magic. Everything it seems, is going downhill. The new generation of magicians are ruining magic as an art. But is that really the case? Maybe this is the greatest time in history for magic – a new golden age:

But now everyone is doing magic tricks.

Years ago it was harder to find, and learn a magic tricks secret. Only the committed were encouraged or had the drive to learn the ‘inner secrets’. Now that magic has developed into a more mainstream activity, all those people with drive STILL find magic today. The difference is that they are not slowed down by gatekeepers, or lack of access to knowledge.

It’s true that many more casual magicians can now also dabble in magic, but the effort to master a performance to the level of an expert isn’t there. They drop out of magic quickly. The result:
The same amount of committed, driven people take the time to excel and develop their skills.
Perhaps even more, as commitment has become the barrier rather than accessibility. There is a much larger casual/hobby following, but they drop out of performing over time. They remain fans of magic, and appreciate watching magic. That feeds the audience for those that stay the course.

Does price and availability matter?

The availability and price of magic doesn’t impact the quality of magicians. In just the same way that the quality of professional singers isn’t damaged by the fact that songs are free to sing. It’s talent that’s important, the increased popularity of magic increases the number of talented magicians that can emerge. The poor quality acts also increase but don’t gain an audience.

But terrible magicians on Youtube are putting people off magic.

There have been terrible magicians all through history. There have also been terrible singers, artists, authors and actors. Amateur dramatics is not killing cinema, just like karaoke isn’t hurting the music industry. We are not put off by the terrible audition acts when we watch Britains got Talent or X-Factor. We love the show more because of it. There’s a saying: The sour makes the sweet taste sweet.

Badly presented magic on youtube is low quality and  just like anything else, there’s always going to be lots of it. It makes us appreciate the real talent the ‘diamond in the rough’. There’s a huge amount of excellent magic on YouTube in amongst the poor stuff. There’s just as much bad comedy, art, dance too, but the good stuff is filtered through and shared.

Poor quality YouTube videos don’t fool us, we all know their status. Some people learn a little from them whilst others get inspired to explore magic themselves, but most people dismiss or ignore them.

Awful Youtube magic videos need to exist. They have a purpose. It’s the modern version of the uncle who bores you to death with his shambolic magic tricks. You can judge good magic against it.

It wasn’t any better.

We view the past through rose tinted glasses. Were the magicians props and tricks over the last 100 years any better than those today? More expensive and harder to order, yes, but quality? Browse through any magic shop website and pick out all the items you think are terrible and you wouldn’t ever be seen using. What percentage of them have been around for decades?

The stereotypical magician is not new.

Magic had a negative stereotype far before the Internet came along. The magicians that are mocked are dressed and use props from the time before magic became so commercial. We mocked unpracticed magicians then, and we still do now. Nothing has changed. What we are really mocking is lack of practice, presentation and skill. Those shortcomings have been ridiculed all through history.

Tommy Copper used magic for the sake of comedy. He did it with love, but its clear he understood completely how magicians were mocked by the public in the 1970’s and he based his persona on the popular stereotype of the clumsy magician who’s tricks go wrong.  People tuned in to be made to laugh as much as to enjoy his magic tricks. His persona allowed the audience to laugh AT him knowing they were also laughing WITH him.

The 1960’s 1980’s and 1970’s, what some refer to as the golden age were not  filled with amazing magic TV shows any more than today. Yes, we can name some great shows, but magic on TV was still rare, compared to any other type of program. There were great magicians on TV then and there are great magicians inspiring and amazing viewers today. TV shows have had to change their format over the years as TV magicians have to deal with a different way that the audience watches their shows. We can now record, rewind and repeat shows as much as we want, this isn’t a reflection on the quality of magic presented, but more an adaption to the way audiences interact with it.

The shows are different, but magic is still loved, hated and ignored as much as ever. Many of the changes we see in the way TV presents magic, are happening across all forms on entertainment. Chat with entertainers in any form and you get the same concerns over the format and presentation. It’s not magic that’s changed, it’s TV and audience tastes in general.

The golden age of magic VS. Selective recall.

Every generation feels that things have gone downhill, and that things were better in the past. This has more to do with growing older than historical fact. People don’t like or trust change and hark back to a “simpler, better time”. Psychologists have demonstrated that human memory is hard wired to remember positive events more than negative. It’s just the same with magic. The magicians in the 19th Century probably longed for a return to the golden age of magic, just as we are drawn to do so today.

Despite how it may seem, magic has never been more popular at any time in history. There are an incredible number of creative people passionate about magic.

Right now, as you read this, magic shows are being broadcast on TV channels all over the world. Thousands of people are watching magic and searching for it online.

Our ability to learn and develop our skills and to push the boundaries of what is possible for magicians had never been greater.

The huge number of amateur magicians learning and exploring magic isn’t its undoing, it’s a signal that magic is alive and well, staying current and perhaps in a new golden age. 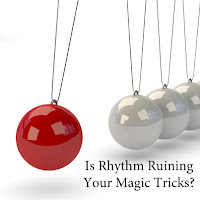 Is your tempo rhythm working against you when you perform your magic tricks?

When we perform, we all tend to have a constant rhythm or tempo that we stick to most of the time. Some of us are full of energy and run at a fast pace. Many magicians present their magic at a more thoughtful, steady speed.  The tempo and rhythm of your magic depends greatly on your performing character and persona, but being aware of it, and in a position to control it, can greatly help your performance.

Back in 1918, Stanislavski realised the usefulness of physically and emotionally adding richness to your act by the creation and control of tempo-rhythm. Stanislavski saw the tempo-rhythms of anything physical or vocal to be similar to that of music. Music has a range of movements like legato, staccato, andante or allegro structured in a progressing line. In just the same way, how you present your magic tricks, and the patter of your act, should have it’s own tempo-rhythm. This will make your presentation much more natural, motivate a more emotional performance, and have a dramatic impression on your spectators.

It’s about how you feel.

Often, the tempo of a performance is linked to how the magician feels. This is one of the reasons why The Merchant of Magic doesn’t recommend doing Jazz magic (working without a script or planned act) unless you are a very experienced magician. Sometimes at a gig, we are full of energy, other times we may be bored, tired or distracted. Most of the time, we are not aware of our emotional states, and don’t see that we may be performing in the wrong tempo. Being aware of our tempo-rhythm means that we can switch pace, pushing forward more energy and in doing so, feel more positive. Controlling the tempo and energy of a performance communicates to the audience, which in turn feeds back to us and reinforces our behavior.

Sometimes a particular rhythm is a deliberate choice. Dynamo Magician Impossible and David Blaine present their magic tricks in a slow steady paced tempo-rhythm. David Williamson or Gregory Wilson are the opposite, doing magic tricks in a manic state, full of energy.  Choosing your performing persona isn’t just about the clothes and magic tricks you will perform. You need to choose a level of energy and pace for your magic.

You don’t need to stick to a single tempo-rhythm. Derren Brown changes tempo quite often in his stage show. Changing from a slow thoughtful or emotional presentation, to a fast paced trick that moves around the stage and has plenty of comedy.

DO THIS: If you arrive at a gig feeling tired or have had a bad day. Be aware that this may reflect in your performance without you being aware. The speed and lack of energy in your show could be signalling this negativity to your audience. Change the pace. Be an actor.  Create more energy and positivity. As a result, you will find this changes your mood and the act becomes the reality.

Examine your own act and performing persona. Does it have a single tempo-rhythm? Is it right for you?  How could you change a magic tricks tempo-rhythm to compliment your character? A magicians hook is a technique that magicians can use to make people interested in their magic tricks. It’s a dramatic technique most often used in good writing and advertising  You may have an amazing magic trick to show your audience, but unless you capture their attention quickly, you may not be getting the best reactions to your magic. Let’s look at 7 hooks that professional magicians use to make spectators pay attention to their magic:

1. Begin your magic tricks with a simile or a metaphor.
Your mind is like an open book. These coins are like people.

2. Ask a question.
Do you know what real magic looks like?

4. State a quotation.
Charles de lint once said: “That’s the thing about magic; you’ve got to know it’s still here, all around us, or it just stays invisible for you.” Let me show you what he means..5. Explain you have a dilemma.
Create a problem, and then propose a solution. Suggest that what you want to show them is very secret and special: ‘You know, many magicians have asked me never to show this magic trick to the public..’
6. Begin with a scene.
Imagine what it was like being a slave building the pyramids in Egypt, thousands of years ago..
7. Give them an anecdote.Tell a short story, setting a scene from your childhood, your first experience of magic or how you became a magician.
Using a hook to introduce your magic, or a specific magic trick can be much more effective than simply saying; “and for my next trick”. As a magician, you are also a storyteller. Give your magic tricks a context and a purpose for being performed. The results will surprise you.