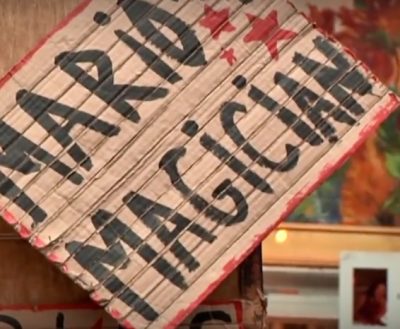 We stumbled over this excellent video by KAL about Mario the Magician, posted on Andrew Maynes iTricks blog

A fascinating look into the life of a New York street magician and the creative process that has developed his kids magic show.

What’s especially interesting for us and the reason we have re-posted, is that Marco talks about his personal motivation for performing magic to kids on the street:

‘Magic is creating a moment for somebody else. Where they forget that reality is reality, and they actually question everything for a moment. Not in a scary way, but in the most exciting way, because magic is an experience. Magic is a total moment of being astonished, and questioning what you believe.It’s all about reinforcing a kids natural instinct to believe. Each labored over routine, each hand made prop, each gesture of controlled chaos in my performance sends the same message to them.’ – Mario the Magician

Now that’s what it’s all about! We all believed in magic when we were kids, but for most of us, life got in the way. Regardless of the age of the people you perform your magic tricks for, your job as a magician, is to ALLOW them to believe again, if only for a few moments.

Why do you want to perform magic? We would love to know what motivates you. Leave a comment in the comments section below:

‘I need advice on approaching people in the street, as I lack confidence and fear they won’t like me or my magic tricks’

Paul loves his magic and wants to get out and start performing it to the public. Like many people in recent years, he may have seen TV shows where a magician stops people in the streets and blows their mind with magic. However, if you have ever tried doing that yourself, you will understand that it’s not that simple.

What you don’t see on those magic TV shows.
The camera is on the magician approaching an unsuspecting member of the public and asking them to check out his magic trick. The spectators love it and the camera films their reactions, before moving on to the next scene. There is a LOT more going on than this!

Street magic TV shows show the audience at home, exactly watch the director and producers feel will be the most entertaining footage to watch. The reality of stopping people on the streets to show them something is very, very different. If you went out now, to your local high street and started stopping people you will hit these problems:

People are busy and don’t know you.
Normally, people watch magic because they choose to do so. They may be at a party or dinner, or even have gone to see a show. Entertainment is the primary activity of the evening. Compare that to a busy high street, and you can see why performing magic on the street is not easy. You become a distraction and a nuisance. Stopping people in the street can be very different to putting on a magic show like a street performer. They are attracting a crowd, who stop to watch by choice. The spectators made their own minds up to watch some magic. If you intend to stop people from going about their business and ask them to watch you instead, you need to be ready for a lot of..

Rejection.
A great experience for magicians thinking of performing on the streets, is to try their hand at high street market research. It’s a very quick way to grow a thick skin as you deal with constantly being rejected. It’s likely that you will experience this as well when you try to stop people on the streets to show them magic. This is one of the aspects of filming a TV show that doesn’t get shown. Even famous magicians with an exciting film crew set up get rejected over and over again as they stop people. If you are new to performing, we usually warn against street magic, until a good level of confidence has been built up, as the rejection can be very depressing and demotivating for beginners.

You may need a license to perform.
Street magicians can sometimes require a license.

You can find out more about needing a license to perform street magic here.

You need public liability Insurance.
It’s also important that you have sufficient insurance if they are going to perform to the public.

You can find out about the right insurance cover for you here.

How to approach people to perform street magic
If you intend to stop people in the street and ask them to watch some magic, we recommend the following:

1) Make it very clear who you are.
Make sure you are dressed appropriately. If you are wearing normal street clothes, some people will think you are approaching them to cause trouble. Make sure it’s clear you are an entertainer. Carry your playing cards or a prop and have some signs that you are not about to mug them.

2) Look official
An idea that a few magicians use with success is to wear an ID pass on a ribbon around your neck. The pass can just have a photo of you on it, your contact details and that you are a street magician. People are less worried when approached by someone, who looks like they have an official reason for stopping them.

3) Smile and be friendly. The person may well be the 20th you have asked to show a trick, but it’s vital you don’t look cross, bored or resigned to rejection. A warm smile and a polite question will really help you.

4) Have someone filming. It’s a great opportunity when you do get a person happy to stop and watch, so make sure it’s on film. This will also look more official and fun for many spectators. Make sure you get permission to film from the spectator as well as the venue.

5) Remember, it’s a numbers game. The more people you ask if you can show them some magic, the more will stop and watch. Don’t be put off if it takes ages to get a taker. Just keep on going.

6) Be polite to people that say no. Remember that it’s their choice to watch your magic. Just because you are going to the effort to be there and perform doesn’t mean they have to watch. As people ignore you and walk past as you ask them a question, don’t take it as an insult. It really isn’t. They are busy and don’t want to engage with you. It’s their right to choose. Just smile and wish them a good day.

Being confident approaching people to show them magic.
Gaining confidence in your performance and how people will react to it, develops slowly. Everyone will be nervous at first. The best way to overcome this is to just go out and do it. Performing to the public takes guts at first. It’s going to be terrifying the first few times you do it. But very quickly, you will learn it’s not as bad as your fears build it up to be.

how to overcome your nervousness as you take on the role of a magician.

Finding it hard to perform magic in front of a crowd

If street magic worth doing?
Yes and no. It’s a good way to gain experience of approaching people. After all, you will be doing that all day and being rejected. It can toughen you up very quickly. However, we would suggest there are better venues to start when you first begin to perform for the public. Seek out local events and charity fundraisers, where you can perform for people who are expecting to be entertained. That’s much easier and can build up your confidence.

Question: Have you been out on the streets and tried your hand at close-up street magic? How did it go and what did you learn from the experience? Share your thoughts in the comments section below. 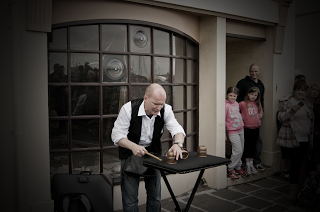 Source: Peter Wardell – One of the Best Street Magic Acts in the UK

Under existing entertainment licensing laws, some live entertainment is exempt from the need to be licensed, as long as it is performed incidentally to another non-licensable activity.  So, for example, a magician or mentalist in a shopping center, during a time when people are shopping there, will not usually need to get an entertainment license.

If you intend to put on a Large magic show, or an event at which live music is a main attraction, or instances where music is not incidental to a non-licensable activity, you will need an entertainment license.

You will also need to apply for a license if you wish to collect money for charity (a street collection license, issued by the Police).

If you intend to sell items, such as magic tricks or DVD’s, while busking will also fall under street trading laws, which may require you to obtain permission.

It is important that magicians have a suitable public liability insurance policy, which covers the content of their magic act.

Magicians causing a nuisance.
Magicians are not exempt from any requirements of the Environmental Protection Act. Should a magicians performance lead to complaints of noise nuisance, enforcement action may be taken against the performer to stop the nuisance being caused.

Similarly, if a magician is found to be blocking or obstructing a public highway or footpath, they may be moved on by police officers.

Contact your local council for full details of the requirements for the location you wish to perform in. You should also get permission if you intend to film video at that location.

Do you have any advice for magicians getting a license to perform street magic? Leave a comment below.