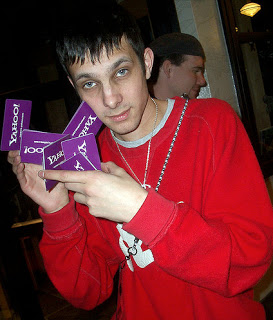 Demand for the magician Dynamo is as strong as ever on TV, and once again, magicians everywhere will hear spectators talking about it. Usually right in the middle of their close-up magic tricks.

No matter what you may personally think about the magic tricks, methods or performances on Dynamo Magician Impossible, it’s wise to have some supportive comments and answers ready when spectators mention him or his show to you.

If you are in the UK it’s Dynamo or Derren Brown, but most stock replies will work for any famous magicians the spectator has seen, such as Chris Angel or David Blaine.

1) The magician Dynamo is currently the UK face of close-up magic on UK TV. The public being aware of magic is a good thing for magicians in general, as it increases demand to see magic live.

2) A spectator being excited about the magic they have seen on TV communicates to the whole group of spectators, that’s what they are seeing is current, popular entertainment.

3) That person obviously likes magic, as they are prepared to watch it on TV.

4) There’s a very good chance that the tricks you show the group will have an equal or better impact than many of the tricks on the shows, so your magic will go down well.

5) The Magician Dynamo TV shows are breaking down barriers and misconceptions about modern magic. People that would not normally be interested in magic are seeing how much magic is fun to watch.

6) Being anything other than supportive and positive suggests that you may be bitter or jealous of Dynamo of his TV success or skills.

Here are some suggestions that are positive and shine a good light on you:

“Yes, that was awesome, he’s a good ambassador for magic. Let me show you some more of that magic LIVE.”

Spectator: “How did the magician Dynamo do… Insert trick name here…?”

Magician: “I’d love to tell you, but magicians vow never to reveal a secret. Let me show you something that might help instead… Go into next trick”

Spectator: “How did Dynamo do… Insert trick name here…?”

“If you believe in magic, no explanation is needed. If you don’t, none will satisfy you.”

We discussed the subject on the Merchant of Magic Facebook Page. Here are some of the lines other magicians use:

Steven Blair  “He did a lot bringing magic back to the public eye, it makes my job busier.”

Daniel Saul” I admire the way he takes an idea and builds upon it to make it that bit more special. Then I show them an example of what I mean from my own repertoire.”

Brian Watson “Dynamo is not only very hard working but also one of the nicest and unpretentious people I’ve ever spoken to.”

Rosa Parkin “He’s a great magician, with a humble approach that puts the emphasis on the wonder and empowerment of magic. A Good lad”

Mark Colfer-Henderson “A good magician with a down to earth approach. He has inspired me in the past.”
Helder Sousa “My magic it’s happening here and now.” (Delivered with a smile)
Ben MacTavish Ratcliff  “He’s great and when he helps people with magic I can’t fault him, but because he’s on TV I have an automatic advantage. Let me show you something just me and you…….”

Alex Ruiz “He is a great magician and deserves what he has.”