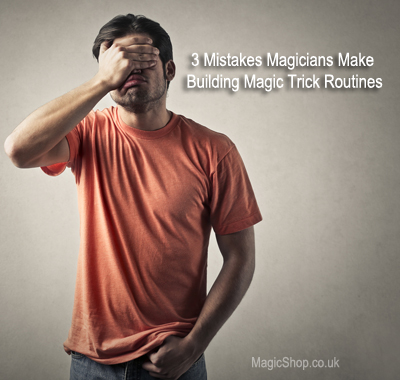 'I have my first performance in a month (I do mostly close-up magic) and I'm struggling with how to put together a cohesive routine.

Also, I'm having trouble with making my classic pass undetectable. Can you help?'

We can certainly help! There are 3 common mistakes that magicians make when trying to build their magic tricks into a cohesive routine or act.

When creating your routines, it's important that you think about pocket management. This is one of the most common mistakes magicians make. It's nice to have routines that all have an underlying theme, but for general close-up magic it is not so important. Make sure your tricks flow and and that you notice how much attention you pay to your spectators as opposed to yourself and your props.

Have you tried practicing your routines fully in whatever you will wear when you perform? Are you planning where every prop will go for the beginning of your routines, but failing to think about where you  will ditch them or put them back when you have finished? If you are mid-performance and searching or fidgeting for props in your pocket,  this can cause confusion and make you lose the flow of the routine. It is these moments that can knock you the most when you perform.

When practicing, wear you suit jacket or whatever outfit you will perform in. Run through three or four routines, and make a note of where you put things back at the end of the routine. Try to pay attention to keeping your props organised. This way, when you approach the next group you are not fidgeting around looking for a sharpie or a coin, or worse still an important gimmick like a coin bender!

2) Failing to remember that the tricks must compliment each other

Try to look at things that will compliment each other without cluttering up your pockets. Add a little variety, it can be boring to do three transposition magic tricks in a row. For a magician, it can seem interesting if tricks get gradually more impossible or use a different method each time. Unless you convey this point to the spectators, it won't translate.

3) Picking tricks that are secretly identical

Sometimes a magic trick can seem different to us because we know the method, but the spectators may see it as the same effect. For example, you could have one playing card in your wallet that your spectators somehow name. This is the same sort of trick as having your spectator name a playing card, and you then show it to be the only one reversed in a deck of cards.

With regards to sleight of hand moves such as the Pass. The pass, when it was first originally taught, was never meant to be seen. It was regarded as invisible because performers used it with the correct misdirection. Sleights like this were never meant to be invisible to a watching eye. On more than one occasion, I've stood still and paused (before needing to do a move with cards) when everyone was looking at my hands. I couldn't do the move without pointing it out. So I just sat there; relaxed, and said with a chuckle:

“Well, I'm not gonna do anything if you look that close!”

That's kind of a funny thing to say, but it can give you ample time to do a move under the laughs and misdirection.

Do not sweat the invisible-ness of your pass just make sure you are more engaging and entertaining to look at than your cards, and you will be fine. If you can perform a competent pass without looking or and fidgeting with the cards, then that will suffice. You can always use you body to cover actions such as the pass. Turn from side to side as you perform it. Sometimes when I am at tables, I will crouch down to the table edge, so I am more on their eye line, and it is when I crouch down that I perform the move. Think about this as well, if you've seen some videos on YouTube or the internet, of people doing really invisible passes. Imagine if there was more than one camera set up on them. You only see one angle. If you had 8 or 9 of those cameras chances were, you would see a massive flash of what's going on.

I hope this helps Gideon, great work on getting out there, just make sure you have fun. If you do simple things and have fun it will be better than you doing complicated tricks and being nervous or unsettled throughout your performance.

Please let us know if there is anything else we can do for you and let us know how the gig went! 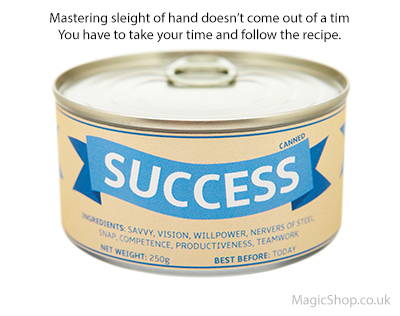 'Just dropping a quick mail with my first ever recording of me performing the Elmsley Count – I've had to improvise a tripod with my webcam using a couple of coffee jars and some Blu-Tak 😉 Unfortunately the sound isn't too good, but at least it disguises my rather shameful patter!  There are some things I spotted in there that still need work before I can unleash this on the public, but given that just two weeks ago I couldn't even begin to consider sleight of hand tricks, I'm really happy with the progress so far.  Loving it so far, and really looking forward to months 2 and 3.' – John Hutchison

Your timing is very good indeed. It really is all about the timing and flow of the technique. Not too rushed and not too slow. Try to focus lifting the ace lifting of the ace as natural as possible. Keep going with this, and remember say your patter loudly and clearly. Even when you practice, you should speak as if someone is actually there watching you. Begin to look away from the cards inbetween phases, and address the audience with eye contact, before doing the next phase. The patter should have energy so it doesn't seem focused on the mechanics.

Very impressive for so early in the drill process.

I'm also detecting some tension in your hands, that's because you are really concentrating. As you drill, you will find that the timing starts to remain constant, but your hands will relax a little more. It's a subtle difference, and not one that you can force. Just keep drilling and it will be the natural result of the drilling process.

Keep going and let me know how you get on