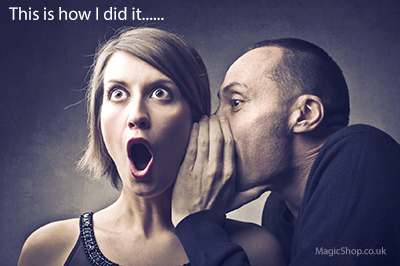 I'm often asked if I can teach a magic trick to one of the guests when I'm performing at a party or wedding. What should I do? I'd like to show them a simple magic trick that they can  do, but at the same time I don't want to expose magic secrets. – John

That's a good question and one most magicians asked themselves. Teaching a simple magic trick is fine as long as you are very careful about what you teach. As magicians we promise not to disclose secrets, we also don't want to reduce the impressiveness or importance of our own magic by showing that it is just a collection of easy to master magic tricks.  However, there is a good way to approach this. You can show them something that is not too technical, advanced, or the work of another magician. It's absolutely fine to teach them a magic trick as long as it is in the public domain, and doesn't reveal one of the core principles of magic technique. So what sort of tricks are OK to teach?

The perfect magic trick to teach a spectator is one where the secrets of a magic trick is revealed as part of the ending anyway. Bar bets or  proposition cons are ideal examples of this. The conclusion of the trick automatically shows and teaches the method so you're not exposing any  secrets. There is a huge range of magic tricks like this that you can use, they may not be magic in the strictest sense of the word, but they are entertaining and will satisfy your spectators curiosity and desire for a trick that they can do themselves.

Pushing an object through a cup.

A simple spur of the moment magic trick that you could teach spectators would be a demonstration of how you can push an object through a cup. You  take a coffee cup and place it on the table, You announce that you will be able to push a large borrowed object (such as a mobile phone) through  the small handle of the cup. It seems totally impossible. The huge object, such as a phone, or maybe a wine glass couldn't possibly fit through the small handle of the cup. When they ask you for the solution, you simply place the object in front of the cup, put your finger through the handle hole, and push the object with your finger. There.. you pushed the object through the cup!

It might not be a stunning example of sleight of hand, no real magic is taken place, but it will satisfy the spectators, entertain them and give them something to try out on their friends  later.

There are lots of books and DVDs which teach bar bets or puzzles like this, and you'll be able to find them free of charge at your local public library. Being armed with just a few small easy to learn magic tricks that you can teach will mean that you never have to disappoint spectators or reveal the real secrets of close-up magic.